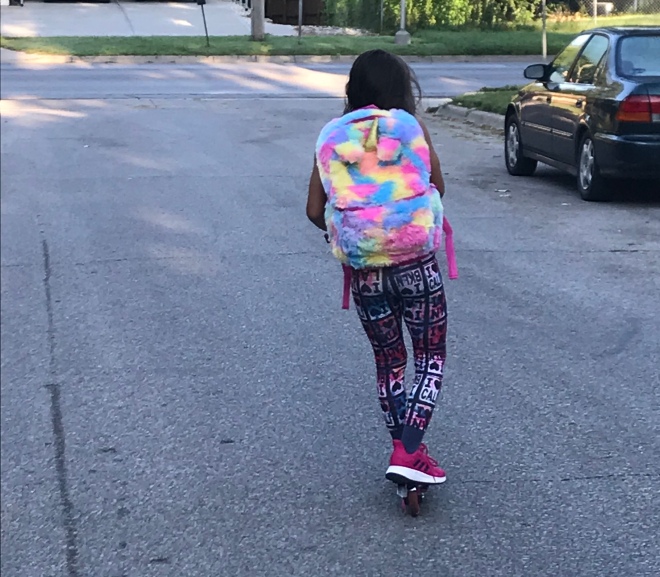 What kind of young child gets suspended on the ninth day of the school year?

A child who, even medicated at the most appropriate level still struggles to prevent the challenges of her ADHD from overcoming its benefits (and there are benefits, such as increased creativity).

A child with a fierce independent streak and a moderate case of Oppositional Defiant Disorder, who, in spite of it, must negotiate this world full of rules, especially for young kids.

For those of you playing the home game, for more than three years, I have been a step-mom-like person in the lives of my partner’s two children, whom he and his ex-wife adopted from foster care. His ex-wife is remarried, so we are four co-parents to LaLa and Bubs. Some days, honestly, four parents are not enough.

The other day, I got a message from one of the parents that LaLa was being suspended from school for refusing to follow directions.

Unbeknownst to my partner and me, LaLa had been to the principal’s office three school days in a row for the same behavior–communication among the four of us is generally good and generally amicable, although sometimes things fall through the cracks.

So, that day being the third day, with an alternative classroom placement and in-school suspension failing, the principal had decided to send LaLa home for the rest of that day and the next day.

This fell on our custody day, and I was the one available to pick LaLa up, and I went over to their school to retrieve her.

I was surprised to find out that this was the third day in a row that LaLa had been in the principal’s office, as was her dad when I told him. The kids’ mom hadn’t told us.

Certainly, we have a non-traditional family. But in this day and age, there are a lot of family’s who have steps. Also, this is not our children’s first year at this school; the staff know us well.

We felt frustrated that a child whose goal was to get out of being at school was allowed to succeed, reinforcing the idea that if she just buckled down in her defiance, she would eventually break the adults/the system around her and get what she wanted. We are not ok with that, so we are working with her teacher and school on that.

That point aside, it is so, so important for schools to communicate with both custodial parents, hopefully at the same time.

Teachers and school staff often have more on their plates than any human can be reasonably expected to handle. This I know.

Now LaLa’s dad has reached out to her teacher (who is new to the school, but not new to teaching), and set the expectation that all four parents will be kept in the loop in one email.

This is something that should have happened on Day 1. That’s how we’ve handled it in the past, and it works well. We all get the same information, without having to rely on anyone else to tell us.

LaLa’s teacher eagerly asked us for tips and tricks in managing her behaviors. Armed with those, and open communication, LaLa’s days since returning from her suspension have been successful.

There will, no doubt, be other bumps along the way. But we look forward to watching both of our kids, challenges and all, continue to grow into themselves this school year.

Do you have a child in your life who is neuroatypical or has other needs outside of the norm? What tips and tricks did you use along the way to make school easier for them and you?