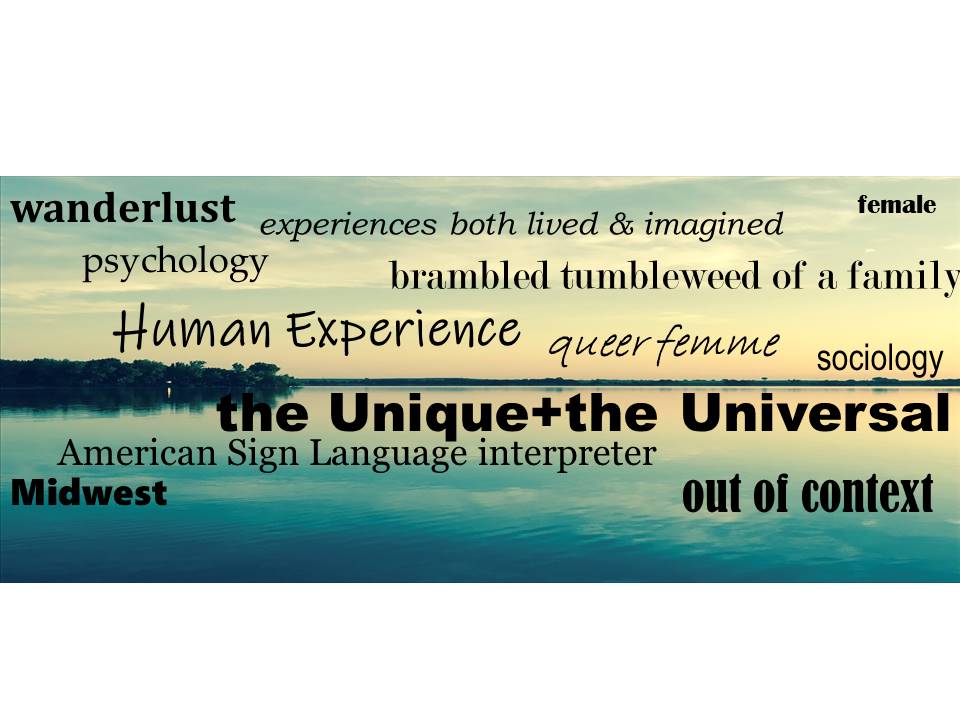 As a writer, I distill experiences, both lived and imagined, into stories which simultaneously encompass the Unique and the Universal.

Raised and living in the Midwest, my works are influenced by my perceptions as a white genderqueer female, as well as my placement in time.

The brambled tumbleweed that is my family tree plus a long history of working with the American Sign Language community lend me perspectives on the Human Experience that are not afforded to many. I enjoy considering what makes others tick on a sociological and psychological level, while figuring out the same about myself.

Currently, I am working between three major projects:

The first, “A Hypnotist, a Rabbi, and a Leo,” is a memoir focusing on family relationships, mental health needs, and faith. This project is currently under development as a part of the Artist INC Advance program, Artist INC KC 2020.

The second is an accidental novel, “Dangerous Creatures of the Sea.” DCotS is the story of two women, both former competitive swimmers, and best friends since college. Freshly dumped by her wife, Aggie Monroe walks out of her job as an editor at a major Midwestern newspaper and into a world of opportunity… or certain ruin. Across the country on the east coast, Cecily Dufresne, a career psychologist, is plagued by the idea that she may never know what caused her mother to kill her father and then turn the gun on herself. Distanced by time and geography, the tapestries of the two women’s lives again intersect–but will there be closure, or merely more unanswered questions?

The third, “One in Eight” is a genre-blending collection of literary non-fiction pieces about my experiences surviving infertility, paired with critical essays that both examine my personal reflections and consider the wider psychological and societal implications associated with modern North American ideas and ideals of infertility, motherhood, and womanhood. You will find archival links to some of the literary non-fiction pieces under the section titled, “Things I’ve Written”.